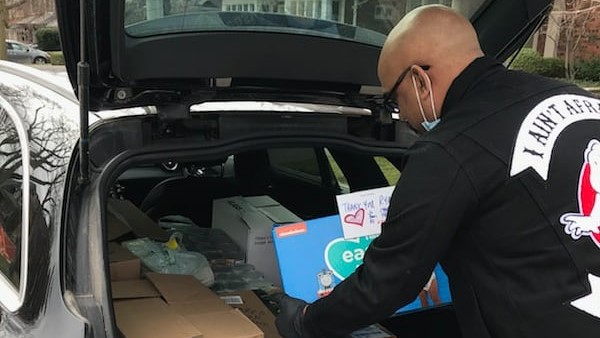 The Power of Mobilizing Your Network

When COVID-19 hit Toronto and Ryan Abreo began to see the demand for food increase dramatically in his community, he felt the need to do what he could to ensure that everyone had access to the food they needed to stay healthy.

Ryan worked with his friends to create a contactless food drive with 15 drop-off locations across the city. Working at the marketing firm, Gladly Beyond, Ryan was also inspired to empower others to run their own campaigns.

He used his skills to create a shareable ‘campaign-in-a box’ which included social content, information on Daily Bread, along with web forms, spreadsheets, and maps. This meant that anyone interested could run their own seven day social media campaign under #kindnessiscontagious, with contactless food pick up on the final day.

As the effects of COVID-19 continued to be felt, Ryan decided to pivot his campaign over the holidays for greater impact, by reaching out to his network and enlisting the support of other collaborators who would be “Food Drive Coordinators.” Their commitment as a coordinator was not only to promote the drive through their channels but more importantly, responsible for picking up food donations from their network of friends and family and dropping it off at the Daily Bread warehouse.

Through this second initiative Ryan also had the endorsement from Hessam Ghadaki of the Times Group, and was able to send out bins across 15 residential buildings across the GTA, as well as receive logistical support, which gave them increased capacity for the number of pick ups and drop offs to Daily Bread.  It also increased the reach of potential donors, and lastly it simplified the process so there was the lowest possible barrier of entry for people who said they wanted to be more involved, but didn’t know where to start.

Over the last eight months, Ryan’s #kindnessiscontagious campaign has raised close to $13,000 and over 6,000 lbs. of non-perishable food.

On behalf of the staff and volunteers at Daily Bread Food Bank, and most importantly the people we serve, thank you Ryan for taking up our cause as your own, and mobilizing your network in such an incredible way!

If you would like to run your own food or fund drive in support of Daily Bread Food Bank, click here to learn more!

By including a charitable gift to Daily Bread in your Will, you will be helping… Read More
Blog Home >